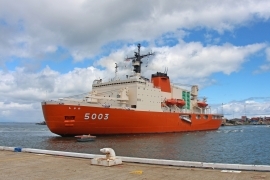 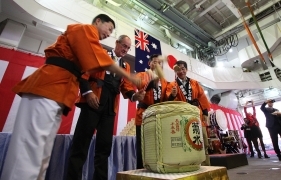 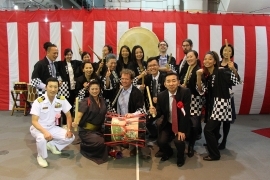 From November 25 to 30, the Icebreaker JS Shirase visited Fremantle Port to refuel and restock food supplies in preparation for the journey to the Showa Research Station in Antarctica. The 60th Japanese Antarctic Research Expedition joined the crew for the onward journey. The Shirase has visited Fremantle Port almost every year for the past 53 years. Many Japanese residents and others welcomed and farewelled the Shirase at the Port.

While in port, Captain Miyazaki, and Expedition Leader Prof. Tsutsumi, paid courtesy calls on the Deputy Mayor of Fremantle, and Commanding Officer of HMAS Stirling. There were also presentations of research in Antarctica at the year-end party of the Japanese Association of WA, and a special visit by students of the Japanese School in Perth on the Shirase.

On November 28, a reception was held on board the Shirase, attended by Mr. Kyran O’Donnell MLA, Shadow Minister for Aboriginal Affairs and Convener of Western Australia Parliamentary Friends of Japan and around 190 supporters of the WA-Japan friendship. There were the Kagamiwari (Opening a Sake Barrel) and a taiko drumming performance by Taiko On. All participants expressed their hope for this year’s successful mission, having a cordial conversation with the crewmembers of the Shirase and the Expedition team.