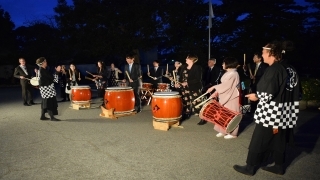 On October 5, a reception was held at the Consul-General’s Official Residence, to welcome the participants of the 2018 JETAA Oceania Conference. Around 60 people attended, including Mr Kyran O’Donnell MLA, City of Perth Commissioner, Ms Gaye McMath, Mr Isobe from the Council for Local and International Relations (CLAIR) in Japan, Mr Akaiwa from the CLAIR Sydney office, JETAAWA President Mr Will Perera, and representatives from the various JETAA chapters.
Consul-General Hirayama welcomed those visiting Perth from the Australian and New Zealand chapters and those representing CLAIR. He expressed his appreciation to the JETAAWA chapter for taking the initiative in organizing and hosting this year’s Oceania Conference. He spoke of the high level of awareness of the JET Programme resulting from its long history, and acknowledged the fantastic ongoing support of CLAIR headquarters, the CLAIR Sydney office, and of the State Government of Western Australia.
Fifteen representatives attended the 2018 JETAA Oceania Conference, from each of the chapters in Australia and New Zealand – Western Australia, New South Wales, ACT, Queensland, Victoria/Tasmania/South Australia, Auckland, Wellington, and the South Island.  They introduced themselves and briefly expressed their excitement to be attending the conference.