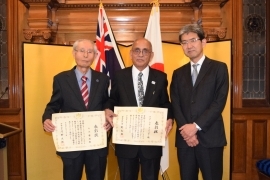 On September 26, a presentation ceremony was held at the Official Residence of the Consul-General, for the 2019 Foreign Minister’s Commendations. Commendations were presented to Mr Masahiro Ogawa, former Director of the Hyogo Prefectural Government Cultural Centre, and Mr Arun Radha Krishnan, former head of then School of Asian Studies at Murdoch University, by Consul-General Suzuki. A message of congratulations to both recipients from Mr Toshizo Ido, Governor of Hyogo Prefecture, was also read out during the ceremony. Both recipients took the opportunity to thank their families, colleagues and friends for their support, while outlining the details of their service to promoting the development of the Australia-Japan relationship and acknowledging the importance of each other’s efforts in accomplishing these achievements throughout the same period of time.