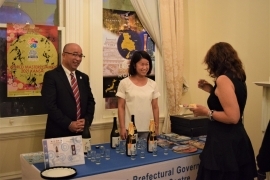 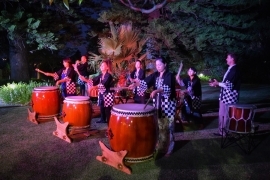 On February 20th, a reception was held at the Consul-General’s Official Residence to celebrate the birthday of His Majesty the Emperor Naruhito, the first celebration since his enthronement and the commencement of the Reiwa Era last year.

At this year’s celebration we were joined by approximately 190 guests, including The Hon. Mark McGowan MLA, Premier of Western Australia, The Hon. Liza Harvey, Leader of the Opposition, as well as representatives from the state government, business community, Consular Corps, universities, Japanese companies and members of the Japanese community in Perth.

At the reception, in addition to a booth by the Hyogo Prefectural Government Cultural Centre promoting the sister state relationship with Western Australia, we had displays courtesy of All Nippon Airways, Ikebana Sogetsu WA and the Bonsai Society of WA and a performance by local taiko drumming group Taiko On. Many guests were able to sample Japanese cuisine including sushi and sake produced in various regions of Japan such as Hyogo Prefecture, while enjoying the friendly atmosphere.