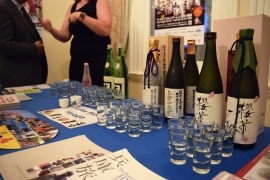 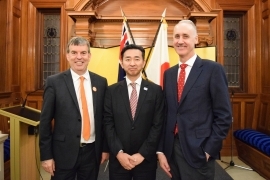 On 6 December, a reception to celebrate the final birthday of His Majesty the Emperor Akihito as Emperor of Japan was held at the Consul-General’s Official Residence. Approximately 170 guests attended the celebration, including The Hon. Dave Kelly MLA, Minister for Water; Fisheries; Forestry; Innovation and ICT; Science, representing the Premier of Western Australia and Dr. David Honey MLA, Shadow Minister for Water, representing the Leader of the Opposition. Also in attendance, were representatives of the state government and business community, Consular Corps, universities, and Japanese companies, as well as members of the Japanese community in Perth.

In his speech, Acting Consul-General Miyata explained the abdication of His Majesty the Emperor and the enthronement of His Imperial Highness the Crown Prince next year as well as His Majesty’s activities as the Emperor. He emphasized the importance of people-to-people exchange between Western Australia and Japan, and said he was confident that such exchanges would be expanded and Japan-WA relations would be further developed in the coming new era. Minister Kelly, representative of the Premier touched on His Majesty’s official duties and personal work. The Minister, explaining his first visit to Japan this year, said that his government would work to further strengthen the relationship with Japan.

At this reception the Hyogo Cultural Centre joined to set up a booth promoting their sister state relationship with Western Australia. In addition, there were displays by INPEX, a Japanese Energy Company, Kagoshima Inaka Network (KIN), Ikebana Sogetsu WA, and the Bonsai Society of WA. Taiko On also performed their Taiko drumming in the garden. Throughout the course of the evening, many guests enjoyed Japanese cuisine and drinks including sushi and sake produced in Hyogo Prefecture and other parts of Japan, while enjoying the friendly and pleasant atmosphere.