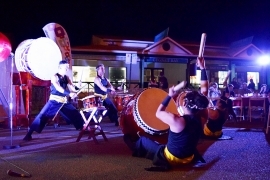 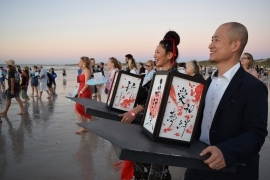 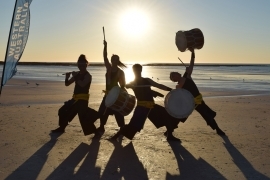 The Shinju Matsuri was held in Broome from August 25 to September 2. This year was the festival’s 48th year, and boasts a deep connection with Japan, and rich history as a festival with its beginnings in the Japanese community in Broome from the early days of the Meiji Era, when many Japanese pearl divers helped to establish the pearling industry in Broome. This year the Consulate-General was happy to participate in the festival. Our involvement, together with Japanese businesses, included the following:

The Consulate-General of Japan was proud to bring a cultural performance to the Pearl Harvest Yum Cha – a Japanese drumming performance by Taiko On. Taiko On delighted the audience for around an hour, with the sounds of the Japanese bamboo flute weaving in and out of the dynamic Japanese drumming, and bringing together these traditional Japanese instruments with the Didgeridoo, a traditional Aboriginal instrument.

Much to the delight of the students of St Mary’s College, Taiko On also performed at the school, showing and teaching students how to strike the drums and encouraging them to try their hand. St Mary’s College has run a student exchange program with Broome’s sister town Taiji in Wakayama Prefecture, for 10 years.

Attended by families of former Japanese pearl divers, this event introduced the history between Japan and Broome, as floating lanterns created by a Japanese artist and resident of Broome, were floated on the ocean to the sound of taiko drumming.

IINPEX held this event to promote and celebrate the commencement of operations at its Ichthys Project, while expressing their gratitude to the region and its people. The Hon Melissa Price MP, Minister for the Environment spoke at the event, stressing the importance of this project to the Australian economy, and her appreciation of the jobs it had created for the local community.